• Learn more about Alonzo Herndon at the New Georgia Encyclopedia

Born a slave and reared a sharecropper, Alonzo Herndon (1858-1927) was destined to drudgery in the red clay fields of Georgia. Within forty years of Emancipation, however, he had amassed a fortune that far surpassed that of his White slave-master father.

Through his barbering, real estate, and life insurance ventures, Herndon would become one of the wealthiest and most respected African American business figures of his era. This richly illustrated book chronicles Alonzo Herndon's ascent and his remarkable family's achievements in Jim Crow Atlanta.

In this first biography of the Herndons, Carole Merritt narrates how Herndon nurtured the Atlanta Life Insurance Company from a faltering enterprise he bought for $140 into one of the largest Black financial institutions in America; how he acquired the most substantial Black property holdings in Atlanta; and how he developed his barbering business from a one-chair shop into the nation's largest and most elegant parlor, the resplendent, twenty-three chair "Crystal Palace" in the heart of White Atlanta.

The Herndons' world was the educational and business elite of Atlanta. But as Blacks, they were intimately bound to the course of Black life. The Atlanta Race Riot of 1906 and its impact on the Herndons demonstrated that all Blacks, regardless of class, were the victims of racial terrorism.

Through the Herndons, issues of race, class, and color in turn-of-the-century Atlanta come into sharp focus. Their story is one of by-the-bootstraps resolve, tough compromises in the face of racism, and lasting contributions to their city and nation.

This gracefully written and highly informative study of the Herndon family of Atlanta reveals much about the overwhelming odds that confronted talented and ambitious African Americans in the era of virulent racism.

—Willard B. Gatewood, author of Aristocrats of Color

Merritt has given us a portrait of the complex social order of the American South as it was refracted through the experience of the Herndons of Atlanta. But she has given us much more by way of a personalized but highly historical narrative. The base story is the ascent of the young ambitious Alonzo Herndon making his way from rural Georgia poverty to commercial success in turn of the century Atlanta. We learn of his relations with diverse communities, the joys and sorrows of his first marriage, the autumnal calm of his second marriage, his parenting of a dutiful son. There is the everpresent straitjacket of segregation, the racial violence of the Atlanta riot, contrasted with the flowering of black higher education in Atlanta. Amid these are surprises and discoveries. The geographical range of the Herndon story extends from Boston to the citrus groves of Central Florida, as well as to Europe of the Grand Tour. Along the way we encounter figures as diverse as David Belasco, Booker T. Washington, and W. E. B. Du Bois. The Herndons is a book of enduring interest that will fascinate the scholar and the general reader.

Merritt has proven herself to be a skilled researcher and accomplished historian. She vividly mirrors late-nineteenth- and early-twentieth-century society and paints a portrait of the Herndon family that will enthrall readers.

What makes the Herndon family story so valuable today is that their experience is further evidence of how diverse the African American experience has been.

Merritt has written a solid general-audience history of this important African-American family, one that takes the reader into their intimate lives.

The Herndons is not only the story of a remarkable family, but also the story of Atlanta, African American progress, and life in the urban South at the turn of the twentieth century.

This family portrait illuminates much more than one family. . . . Merritt's discussion of race relations, social conditions, and Southern history within a family biography is an American story that warms the heart and lifts the spirit.

A beautifully bound and illustrated volume . . . by someone who should know the family history well-the curator for twenty years of the Herndon Museum, Carole Merritt.

CAROLE MERRITT is a former director of the historic Herndon Home museum in Atlanta. She is author of Homecoming: African American Family History in Georgia. 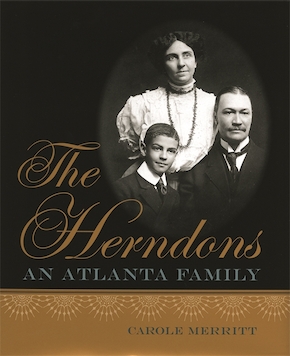