Sarah Gorham recounts her childhood education as a rebellious, insecure, angry girl shipped overseas to a tiny international school perched on a mountain shelf in Bernese-Oberland, Switzerland. There, boot camp style, she experienced deprivation, acute embarrassment, and keen educational guidance, all in the name of growing up. The Swiss landscape influenced her with its paradoxes: unforgiving slopes and peaks; government-controlled hills and valleys-so, too, the languages she's obliged to learn: one ruffian, the other militaristic.

Though her stay lasted a mere two years, her time there was so crucial in her transition to adulthood that she returns to those years decades later, each and every night in memory and dream. There are brief forays into the science of surviving an avalanche; Sherlock Holmes's faked demise at the Reichenbach Falls; the origins of meringue; and the history of homesickness and its spiritual twin, Sehnsucht. In her travels Gorham tracks an adolescent experience both agonizingly familiar and curiously exotic.

From the get-go, the wonderful Alpine Apprentice overlays the incantatory, disquieting logic of dream onto the concrete, the actual, the experientially wakeful. The effect is immediately hypnotic and profoundly affecting. It's as if Gorham is chasing down her researched facts in order to desperately make the shards of her experience gel. And while the research, of course, does this, I adore this other level at which it operates-as testament to the narrator's infectious desire to make sense of one's life. This is no ordinary memoir, but memoir with its edges rubbed soft, like paper aching to return to the sort of tree-state it hardly remembers, but harbors like a fetish.

—Matthew Gavin Frank, author of The Mad Feast and Preparing the Ghost

A new kind of landscape writing resonant with the rhythms of landscape painting, and of water as ice, as falls, as torrent, or avalanche, Alpine Apprentice is an unforgettable curation of a moment in time, a journey, an education, and its bordering dreams. In tones stunningly crisp, rapturous, and sure, Sarah Gorham has taken the book-length essay to a place of high art.

—Mary Cappello, author of Life Breaks In: A Mood Almanack

Sarah Gorham has a poet's eye for detail, a painterly eye for the tableau, an anthropologist's sense of culture, an ecologist's nose for the way all things connect, the way the foreign becomes familiar. She brings a beautiful but often harsh Switzerland to life character by character, meal by meal, verb declension by polysyllabic cuss. Plus sex and drugs-she was the kid the grownups all trusted, but she wasn't always the good girl they thought. Alpine Apprentice is a book of life and love and understanding: funny, poignant, lyrical, sweet, and very smart.

—Bill Roorbach, author of Life Among Giants and The Remedy for Love

Reading Alpine Apprentice is like curling under an eiderdown blanket beside an open window with a mountain view. The air is brisk, the atmosphere breathtaking: sentences climb and descend, glide and pivot, move backward and forward at once to capture the formative influence of Switzerland on Gorham's imagination. With wisdom and charm she explores language, displacement, educational philosophy, moral behavior, and the pleasures-and dangers-of seductive terrain.

Alpine Apprentice is beautifully written, professionally paced, well-managed in alternating sections of narrative and reflection, and enriched with factual materials, lines of investigation, and great visual memorabilia. It is alive, animated by curiosity more than self-centeredness, and the author's decision to broaden the thematic and associative range of materials is entirely well founded. It is a book of sensibility.

Interlaced with tidbits about the origin of certain words, food, and practices in Switzerland, as well as a history of the school itself, this is a (short?) collection of literary essays that coalesce into a life experience. Gorham mixes arresting prose and interesting interjections about her years of coming-of-age, which haunt and shape her still today.

A palpable, loving evocation of experiences 'tucked deep' into the author's soul.

Half a century removed from her experiences at school, [Gorham] is as unflinching with herself and those who helped shape her as she is in describing the foreboding, brutal beauty of the Alps. Even as she wrestles with ambivalence for a place that sends mixed messages about community and control, her affection for the nation and school that were her temporary home is obvious.

Alpine Apprentice is calm and lovely, a book of refuge and alpine heart.

PEN Diamonstein-Spielvogel Award for the Art of the Essay, PEN American Center

SARAH GORHAM is a poet, essayist, and president and editor in chief at Sarabande Books, an independent literary press publishing poetry, short fiction, and essays. She is the author of, most recently, Study in Perfect (Georgia), which won the Association of Writers and Writing Programs Award for Creative Nonfiction. She lives in Prospect, Kentucky. 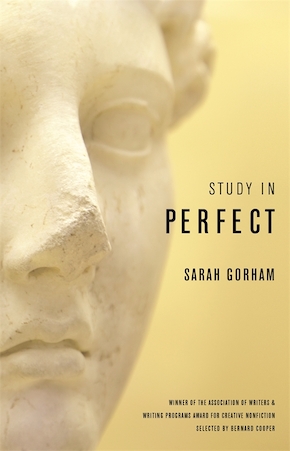