War, Development, and Youth in Africa

War, Development, and Youth in Africa

The Outcast Majority invites policymakers, practitioners, academics, students, and others to think about three commanding contemporary issues-war, development, and youth-in new ways. The starting point is the following irony: while African youth are demographically dominant, most see themselves as members of an outcast minority. The irony directly informs young people's lives in war-affected Africa, where differences separating the priorities of youth and those of international agencies are especially prominent.

Drawing on interviews with development experts and young people, Marc Sommers shines a light on this gap and offers guidance on how to close it. He begins with a comprehensive consideration of forces that shape and propel the lives of African youth today, particularly those experiencing or emerging from war. They are contrasted with forces that influence and constrain the international development aid enterprise. The book concludes with a framework for making development policies and practices significantly more relevant and effective for youth in areas affected by African wars and other places where vast and vibrant youth populations reside.

Deeply documented and fed by on-the-ground analysis, The Outcast Majority is timely and urgent.

One of the most engaging, rich and important books in the growing literature on African youth, The Outcast Majority is a must-read to anyone concerned with the future of Africa and how it will affect and be affected by globalization.

—Mamadou Diouf, Leitner Family Professor of African Studies and History, Director of Columbia University's Institute for African Studies, and coeditor of The Arts of Citizenship in African Cities: Infrastructures and Spaces of Belonging

Based on in-depth field interviews and qualitative research, The Outcast Majority presents a rich, nuanced, and counter-intuitive view of African young people scarred by conflict who have all too often been left behind by the international development project. The book's greatest strength is that Sommers lets young people tell their own life stories.

This is a very important overview of the formidable challenges of African youth, particularly in regard to development and politics. . . . This would be quite good reading for development workers, undergraduates, and graduate students. The study avoids academic jargon and is well organized. A valuable contribution. Highly recommended.

The central strength of The Outcast Majority lies in Sommers' attention to the lives of youth who have built up a stock of knowledge under conditions of great pressure and rapid change. He draws from his extensive professional experience of talking to and listening to youth. . . . Sommers hits the mark in identifying the paradigms of order and control that appeal to people who have a lot of reasons to hold marginalized youth in contempt. He is also right to point to the emerging logic and practices of marginalized people, which are not easily quantified but are critical indicators of the revolution in social relationships that grows out of war and dislocation. In global historical terms, the unfolding of such a process in Africa is hardly exceptional, but it takes a book like The Outcast Majority to begin to bring this new world into focus.

A really original contribution to both scholarship and policy thinking. . . . I'd urge youth researchers, development policymakers, and, if it's not too much to ask, African political leaders and civil servants to read this book (not once but twice) and take its analysis and suggestions seriously. If they do so they will benefit enormously from its original thinking and excellent suggestions about how to turn around youth policy, remedy the problem of the 'outcast majority,' and move young people toward inclusion and progress.

Written in refreshingly lucid prose, The Outcast Majority vividly portrays how people endure the traumas of war and its aftermath. . . [Sommers] persuasively calls into question the emphasis on technocratic solutions and on resilience that figure so prominently in the international development literature and in the practice of development agencies. The Outcast Majority is a powerful manifesto for youth inclusion and for rethinking development doctrine and practices from top to bottom. It is also a model of how ethnographic research can tackle the largest and most meaningful problems, report findings in accessible language and suggest compelling policy alternatives.

The book's greatest contribution lies in bringing together deep ethnographic work on conflict-affected youth in Africa and interviews with people in the aid world. Together, these details and voices demonstrate the mismatch between policy imperatives and the experiences and goals of young women and men across the African continent. The Outcast Majority distills decades of work on these issues and provides a clear call to action for the field.

Marc Sommers's illuminating The Outcast Majority exposes the vast divergence between the priorities of youth in war-affected African countries and those of governments and the international development community.

These are complex subjects, and Sommers navigates them with a self-aware and intersectional lens, conscientiously refusing to replicate the denial of agency he critiques in contemporary government and international development policy.

—Ameya Naik, The Initiative for Policy Research and Analysis

Marc Sommers' book takes us on a startling exploration of the dysfunctional relationship between youth who have been through wars in Africa and the development agencies established to minister to them. A passionate but rigorous defender of Africa's young people, Sommers' insights need to be heeded if the continent is to emerge from its quagmire.

MARC SOMMERS is an internationally recognized youth expert with research experience in over twenty war-affected countries. He has provided analysis and technical advice to policy institutes, donor and United Nations agencies, and NGOs. He also is the author of seven previous books, including Stuck: Rwandan Youth and the Struggle for Adulthood (Georgia), which received an Honorable Mention for the African Studies Association's Bethwell A. Ogot BookPrize, Islands of Education: Schooling, Civil War, and the Southern Sudanese (1983-2004), and Fear in Bongoland: Burundi Refugees in Urban Tanzania, which received the Margaret Mead Award. 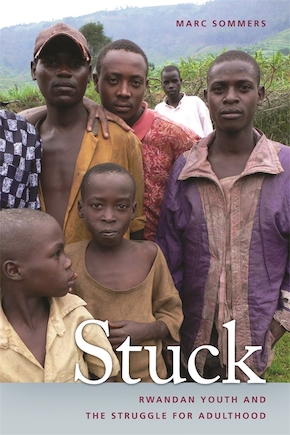