From the time he became mayor in 1937 until he retired in 1961, William Hartsfield dedicated himself to the problems and promise of the city of Atlanta. In the twenty-five years he served as mayor, Atlanta grew from a depression-haunted city to the third most populous capital city in the nation, as well as the leading cultural, commercial, and financial center of the south. During his administration, potentially explosive race relations and controversial annexation issues were handled, laying the foundation for modern Atlanta. Published in 1978, Harold H. Martin's biography is a chronicle of how Hartsfield strove to fulfill the destiny of Atlanta, and in doing so, left his mark on the city forever.

Martin has presented a warm and engaging portrait of Hartsfield and the city he served.

A useful beginning for the study of Mayor Hartsfield and the Atlanta he described as 'a city too busy to hate.'

HAROLD H. MARTIN (1910-1994) served as a journalist in Atlanta for over thirty years, including much of the time William Hartsfield was mayor, and lectured in journalism at Georgia State University. He is the author of several books, including Georgia: A History and Ralph McGill, Reporter and is coeditor of The Encyclopedia of the South. 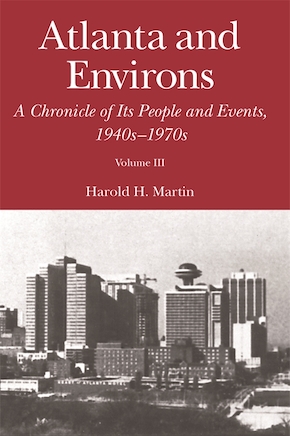