Home > Globalization and the American South

Globalization and the American South

Globalization and the American South

In 1955 the Fortune magazine list of America's largest corporations included just 18 with headquarters in the Southeast. By 2002 the number had grown to 123. In fact, the South attracted over half of the foreign businesses drawn to the United States in the 1990s. The eight original essays collected here consider this stunning dynamism in ways that help us see anew the region's place in that ever-accelerating, transnational flow of people, capital, and technology known collectively as "globalization."

Moving between local and global perspectives, the essays discuss how once faraway places like Latin America, Asia, Africa, and the Indian Subcontinent are now having an impact on the South. One essay, for example, looks at a range of issues behind the explosive growth of North Carolina's Latino population, which grew by almost 400 percent during the 1990s-miles ahead of the national growth percentage of 61. In another essay we learn why BMW workers in Germany, frustrated with the migration of jobs to South Carolina, refer to the American South as "our Mexico." Showing that global forces are often on both sides of the matchup-reshaping the South but also adapting to and exploiting its peculiarities-many of the essays make the point that, although the new ethnic food section at the local Winn-Dixie is one manifestation of globalization, so is the wide-ranging export of such originally southern phenomena as NASCAR and Kentucky Fried Chicken.

If a single message emerges from the book, it is this: Beware of tidy accounts of worldwide integration. On one hand, globalization can play to southern shortcomings (think of the region's repute as a source of cheap labor); on the other, the influx of new peoples, customs, and ideas is poised to alter forever the South's historic black-white racial divide.

Reading through this fine collection, I wondered why it has taken so long for such a work to appear. One of the strengths of this volume is it timeliness.

Overall, a sunny yet sophisticated view of regional change set against a world backdrop-a most engaging read.

—Leon Fink, editor of Labor: Studies in Working-Class History of the Americas

Once isolated, the South today is the nation's most 'globalized' region. Anyone interested in how this transformation happened and what it means should read these stimulating essays. Easily the best available material on the subject.

This book will be immediately interesting to historians of the South, particularly those studying political economy. Each essay offers a focused, clearly argued historical interpretation of globalization in the South supported by large amounts of evidence, useful charts, and extensive footnotes. This concise and readable volume outlines the field well and provides thorough coverage of some of the most important aspects of the topic. It will also be very useful in university classes on southern history and globalization.

Interesting and thought provoking . . . A book that should find its way onto the reading lists of seminars both in southern and diplomatic history . . . A strength of this book . . . is that Cobb and Stueck have drawn a balanced mixture of established and rising scholars. . . . With such an extensive array of topics, this might seem like an unfocused study, but Cobb and Stueck effectively tie these essays together in their introduction and organize the chapters in a logical fashion that flows well. In fact, this section and the book itself are nearly perfect examples of how to put this type of project together. Other scholars undertaking similar anthologies could do worse when looking for a model.

As a scholar of contemporary southern cities and racial politics, I know this volume will work its way into my teaching and research, both of which will be enriched by its findings.

As the current global era in the South goes forward, the read of . . . [this book] will have a better understanding of the sources of change and stability including an appreciation of the vagaries that have always presented themselves and will likely to come.

James C. Cobb (Editor)
JAMES C. COBB is the B. Phinizy Spalding Distinguished Professor of History at the University of Georgia. His numerous publications include Redefining Southern Culture and The Brown Decision, Jim Crow, and Southern Identity (both Georgia), Away Down South, The Selling of the South: The Southern Crusade for Industrial Development, 1936-1990 and The Most Southern Place on Earth: The Mississippi Delta and the Roots of Regional Identity. 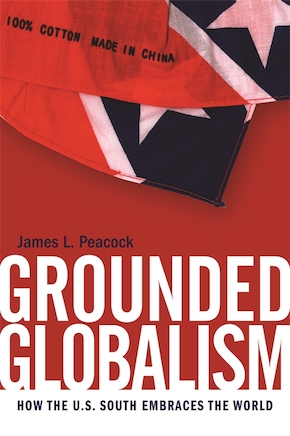