Poverty, Race, and the Limits of Sunbelt Development

Poverty, Race, and the Limits of Sunbelt Development

Poor Atlanta looks at the poor people’s campaigns in Atlanta in the 1960s and 1970s, which operated in relationship to Sunbelt city- building efforts. With these efforts, city leaders aimed to prevent urban violence, staunch disinvestment, check white flight, and amplify Atlanta’s importance as a business and transportation hub. As urban leaders promoted Forward Atlanta, a program to, in Mayor Ivan Allen Jr.’s words, “sell the city like a product,” poor families insisted that their lives and living conditions, too, should improve.

While not always operating within public awareness, antipoverty campaigns among the poor presented a regular and sometimes strident critique of inequality and Atlanta’s uneven urban development. With Poor Atlanta, LeeAnn B. Lands demonstrates that, while eclipsed by the Black freedom movement, antipoverty organizing (including direct action campaigns, legal actions, lobbying, and other forms of activism) occurred with regularity from 1964 through 1976. Her analysis is one of the few citywide studies of antipoverty organizing in late twentieth-century America.

LeeAnn B. Lands skillfully shows how poor Atlantans demanded a seat at the table as political elites and urban boosters sought to turn Atlanta into a business and transportation hub for the South.

Poor Atlanta is a confronting and important story, and its hard reality needs to be faced, especially in an America that is today so polarized and where poverty is so acute and pervasive.

LEEANN B. LANDS is a professor of history at Kennesaw State University. She is the author of The Culture of Property: Race, Class, and Housing Landscapes in Atlanta, 1880–1950 (Georgia). 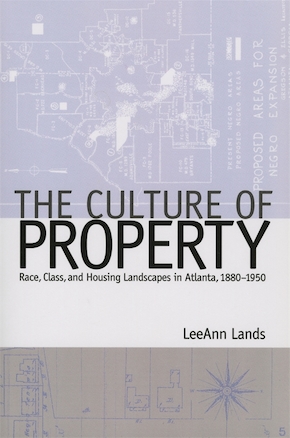 The Culture of Property