An essay collection that asks how the landscape affects personal identity

With Mountain Madness, Clinton Crockett Peters chronicles his travels and personal transformation from a West Texas evangelical to mountain guide-addict to humbled humanist after a near-fatal injury in Japan's Chichibu Mountains. From 2007 to 2010, Peters lived in Kosuge Village (population nine hundred), nestled in central Japan's peaks, where he was the only foreigner in the rugged town. Using these three years as a frame, this essay collection profiles who he was before Japan, why he became obsessed with mountains, and his fallout from mountain obsession, including an essay on Craig Arnold, the poet who disappeared on a Japanese volcano. Ultimately, the collection asks, how can landscape create and end identities?
In the tradition of William Least Heat Moon's Blue Highways and John Steinbeck's Travels with Charley, Clinton Crockett Peters takes his readers along on his adventures, but not in a truck or a camper, and most of the time, far away from paved roads. From the desert canyons of Texas to the top of Mt. Fuji, Peters, time and again, sets off on foot, navigating trails, climbing mountains, and crossing rivers. While taking a hard look at the adrift, danger-seeking, younger self he remembers, he introduces us to the people he meets along the way and shares their unforgettable stories. At one point, Peters thinks, 'I suppose no one does life or every trail right,' but in this collection, he gets every essay right, showing us that we all carry a wilderness of our own making.

—Jill Talbot, author of The Way We Weren’t: A Memoir

—Lawrence Lenhart, author of The Well-Stocked and Gilded Cage: Essays

In Mountain Madness, Clinton Crockett Peters hikes wild trails and metropolis streets and climbs mountains, real and metaphysical, as he scrambles over an introspective scree of a life lived in heavy (and often humorous) contemplation of faith, loss, and love. In this cross-cultural expedition between Texas and Japan, we see Peters's 'layer cake of disintegrating life' lain artfully bare. If as he claims, 'A hike is like a good prayer,' then pack this treasure of a read along for the journey. It travels well through heart and mind.

CLINTON CROCKETT PETERS has been awarded literary prizes from Shenandoah, North American Review, Crab Orchard Review, Columbia Journal, and the Society for Professional Journalists. His writing has appeared in Orion, Southern Review, Hotel Amerika, The Rumpus, and many other venues. He lives in Carrollton, Texas. 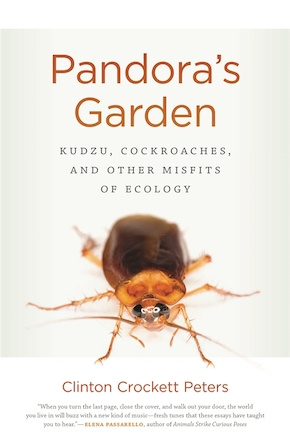