A powerful new reading of the relationship between nineteenth-century sentimentality, religious discourse, and antislavery reform

In contrast to the prevailing scholarly consensus that understands sentimentality to be grounded on a logic of love and sympathy, Apocalyptic Sentimentalism demonstrates that in order for sentimentality to work as an antislavery engine, it needed to be linked to its seeming opposite-fear, especially the fear of God's wrath. Most antislavery reformers recognized that calls for love and sympathy or the representation of suffering slaves would not lead an audience to "feel right" or to actively oppose slavery. The threat of God's apocalyptic vengeance-and the terror that this threat inspired-functioned within the tradition of abolitionist sentimentality as a necessary goad for sympathy and love. Fear, then, was at the center of nineteenth-century sentimental strategies for inciting antislavery reform, bolstering love when love faltered, and operating as a powerful mechanism for establishing interracial sympathy. Depictions of God's apocalyptic vengeance constituted the most efficient strategy for antislavery writers to generate a sense of terror in their audience.

Focusing on a range of important antislavery figures, including David Walker, Nat Turner, Maria Stewart, Harriet Beecher Stowe, and John Brown, Apocalyptic Sentimentalism illustrates how antislavery discourse worked to redefine violence and vengeance as the ultimate expression (rather than denial) of love and sympathy. At the same time, these warnings of apocalyptic retribution enabled antislavery writers to express, albeit indirectly, fantasies of brutal violence against slaveholders. What began as a sentimental strategy quickly became an incendiary gesture, with antislavery reformers envisioning the complete annihilation of slaveholders and defenders of slavery.

Kevin Pelletier's Apocalyptic Sentimentalism makes an important and original contribution to critical debates about the structure and logic of sympathy in the antebellum period. Through careful readings of abolitionist literature from David Walker through Maria Stewart, Harriet Beecher Stowe, and John Brown, he reveals just how significant the threat of apocalypse and its concomitant production of fear worked in concert with appeals to sympathy and, as Stowe put it, 'feeling right.'

This book significantly redefines the U.S. sentimental tradition, unsettling conventional understandings of the relationship between sentimentality, religious discourse, and antislavery work. Pelletier's new model of American literary history places the notion of apocalyptic fear at the heart of the antislavery movement. I am certain that no scholar will be able to talk about sentimentality and abolition during the antebellum period without referencing Apocalyptic Sentimentalism.

Pelletier's study is anastute, enjoyable, and accessible addition to the vast body of scholarship onabolition and antebellum print culture, reminding us that nineteenth centurysentimentalism was by no means soft.

Although Pelletier situates his interventions primarily in the field of sentimental literature, there is much here for scholars of history, religious studies, and literature to learn about the importance of the apocalyptic in American culture. . . . Pelletier's conceptualization of apocalypse challenges scholars of antebellum religion to think more broadly about the implications of living in a world that could be doused in the fires of divine wrath at any moment.

This illuminating and powerfully argued study offers one of the most astute and provocative new readings of sentimental culture to appear in the last several years. Scholars and students of American abolition-and antebellum religious and reform cultures generally-should consider it required reading.

KEVIN PELLETIER is an associate professor of English at the University of Richmond. His work has been published in African American Review, Cultural Critique, and LIT: Literature Interpretation Theory. 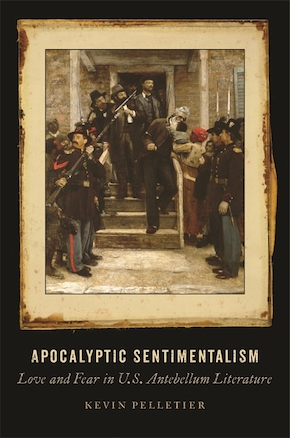