An insider's account of the influential, but often overlooked, civil rights organization from which Jesse Jackson emerged

This is the first full history of Operation Breadbasket, the interfaith economic justice program that transformed into Jesse Jackson's Operation PUSH (now the Rainbow PUSH Coalition). Begun by Martin Luther King Jr. during the 1966 Chicago Freedom Movement, Breadbasket was directed by Jackson. Author Martin L. Deppe was one of Breadbasket's founding pastors. He digs deeply into the program's past to update the meager narrative about Breadbasket, add details to King's and Jackson's roles, and tell Breadbasket's little-known story.

Under the motto "Your Ministers Fight for Jobs and Rights," the program put bread on the tables of the city's African American families in the form of steady jobs. Deppe details how Breadbasket used the power of the pulpit to persuade businesses that sought black dollars to also employ a fair share of blacks. Though they favored negotiations, Breadbasket pastors also organized effective boycotts, as they did after one manager declared that he was "not about to let Negro preachers tell him what to do." Over six years, Breadbasket's efforts netted forty-five hundred jobs and sharply increased commerce involving black-owned businesses. Economic gains on Chicago's South Side amounted to $57.5 million annually by 1971.

Deppe traces Breadbasket's history from its early "Don't Buy" campaigns through a string of achievements related to black employment and black-owned products, services, and businesses. To the emerging call for black power, Bread­basket offered a program that actually empowered the black community, helping it engage the mainstream economic powers on an equal footing. Deppe recounts plans for Breadbasket's national expansion; its sponsored business expos; and the Saturday Breadbasket gatherings, a hugely popular black-pride forum. Deppe shows how the program evolved in response to growing pains, changing alliances, and the King assassination. Breadbasket's rich history, as told here, offers a still-viable model for attaining economic justice today.

An eyewitness to the unfolding of Dr. King's work in Chicago and the beginning of my national leadership, Rev. Martin Deppe has written an important addition to the canon of civil rights movement literature: the history of Operation Breadbasket. It was fifty years ago that Dr. King assigned me to head Breadbasket, the economic arm of the still ongoing crusade for racial and social justice in America. Rev. Deppe was there from the beginning as a member of the steering committee. Because of the urgency of today's issues of want and war I had almost forgotten our beginnings. Rev. Deppe, however, has reminded me and anyone else who has the pleasure of reading this wonderful book that a tree cannot grow without roots.
The best small history/political science books fill in huge socio-historical gaps that few see. Deppe's treatment of Operation Breadbasket is a great compact study, because he combines diary elements, a significant amount of primary and secondary sourced history, and just plain observation transformed into clear analysis.

—Drums in the Global Village

The valuable detail of business contacts, negotiations and persistent follow-up provides insight to the hard work of many dedicated individuals. What a lesson!

—former president and CEO of the American College of Healthcare Executives

Operation Breadbasket recalls one of the early biracial efforts to bring economic justice to Chicago's black neighborhoods. More significantly, it provides insight into the fragile nature of coalition-based crusades and the difficulty of maintaining staying power while following charismatic leaders with shifting agendas in a movement already in flux. This is a cautionary tale as much as a retelling of a positive episode in civil rights history

—The Journal of African American History

MARTIN L. DEPPE is a retired United Methodist Church pastor in Chicago. He attended the first organizing meeting of Operation Breadbasket and worked with Breadbasket until its close. 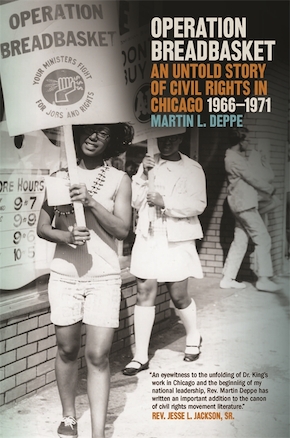