Home > The Craft of Art

The Craft of Art

Originality and Industry in the Italian Renaissance and Baroque Workshop

Edited by Andrew Ladis, Carolyn Wood and William U. Eiland

The Craft of Art

Originality and Industry in the Italian Renaissance and Baroque Workshop

Edited by Andrew Ladis, Carolyn Wood and William U. Eiland

In this collection of nine essays some of the preeminent art historians in the United States consider the relationship between art and craft, between the creative idea and its realization, in Renaissance and Baroque Italy. The essays, all previously unpublished, are devoted to the pictorial arts and are accompanied by nearly 150 illustrations. Examining works by such artists as Michelangelo, Titian, Volterrano, Giovanni di Paolo, and Annibale Carracci (along with aspects of the artists' creative processes, work habits, and aesthetic convictions), the essayists explore the ways in which art was conceived and produced at a time when collaboration with pupils, assistants, or independent masters was an accepted part of the artistic process.

The consensus of the contributors amounts to a revision, or at least a qualification, of Bernard Berenson's interpretation of the emergent Renaissance ideal of individual "genius" as a measure of original artistic achievement: we must accord greater influence to the collaborative, appropriative conventions and practices of the craft workshop, which persisted into and beyond the Renaissance from its origins in the Middle Ages. Consequently, we must acknowledge the sometimes rather ordinary beginnings of some of the world's great works of art--an admission, say the contributors, that will open new avenues of study and enhance our understanding of the complex connections between invention and execution.

With one exception, these essays were delivered as lectures in conjunction with the exhibition The Artists and Artisans of Florence: Works from the Horne Museum hosted by the Georgia Museum of Art in the fall of 1992.

What emerges from these essays is a sharperunderstanding of the complex and shifting balance between the mental and themanual in a work of art in a time when collaboration with pupils, assistants,or independent masters was an accepted part of the artistic process. . . . Itis simply a book that all art historians should read and one from which allscholars of the early modern period will benefit.

Andrew Ladis (Editor)
ANDREW LADIS (1949-2007) was the Franklin Professor of Art History at the University of Georgia's Lamar Dodd School of Art. A specialist in the painting of the early Italian Renaissance, he played a prominent role in international scholarship in that field, writing or serving as general editor of fourteen books and producing many articles and ­published ­lectures. Ladis was the recipient of several international awards and appointments; he was a presidential appointee to the Council of the National Endowment for the Humanities.

Carolyn Wood (Editor)
CAROLYN WOOD is the university educator at the Ackland Art Museum, University of North Carolina, and a specialist on seventeenth-century Italian painting.

William U. Eiland (Editor)
WILLIAM U. EILAND is the director of the Georgia Museum of Art at the University of Georgia. He is the author of Nashville's Mother Church: The History of the Ryman Auditorium and the general editor of The Craft of Art (Georgia) and Crosscurrents in American Art and Imagery of Women in Seventeenth-Century Dutch Art. 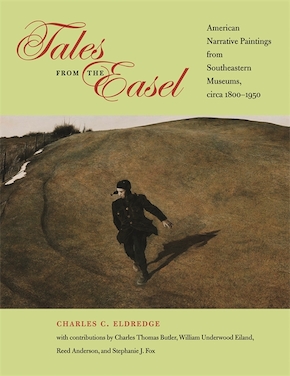