Home > The History and Adventures of an Atom

In The History and Adventures of an Atom, a London haberdasher relates extraordinary tales of ancient Japan as dictated to him by an omniscient atom that has lived within the bodies of great figures of state. Intended "for the instruction of British ministers," the work is a savage allegory of England during the Seven Years' War (1756-1763), draping kings and politicians, domestic and foreign affairs in an intricately detailed, endlessly allusive veil of satire.

Lacing his commentary with vitriol, Tobias Smollett gives fantastic expression in the Atom to many of the concerns voiced in his historical and political writings. He creates from the details of Japanese history an ingenious catalog of English places and personalities-from the up-start ruler "Taycho," whose graspings for power resemble William Pitt's, to a god of war called "Fatzman" who suggests the grotesquely obese Duke of Cumberland. Smollett also draws on the imagery of the period's scurrilous political cartoons and injects into his satire a Rabelaisian humor that makes this work perhaps the most scatological in English literature.

Edited and introduced by Robert Adams Day, this edition of the Atom is the first to appear since 1926 and the first ever to provide a carefully prepared text, a full apparatus of historical annotations, and an accurate key to personages and places. Day establishes the authorship and the long-disputed work, placing it within the context of Smollett's writings and opinions, his times and literary world.

At last a definitive, scholarly edition, the first to appear since 1926, of Smollett's most puzzling and controversial work. It is a satire in the tradition of Rabelais and Swift, particularly in respect to its scatological images. This carefully prepared edition, with all of the appropriate textual apparatus, includes extensive historical and literary references and an accurate key, in alphabetical order, to personages and places that are presented in the text as Japanese names and based on a collation of existing keys. In the introduction, Day presents general information about the political structure of England during Smollett's time; a most useful review of the major events of the Seven Years' War; a summary of some of Smollett's political opinions; helpful information concerning the work's sources, literary influences, publication, and reception; and incontrovertible proof for Smollett's authorship. A chronology of dates and events relevant to Atom in relation to Smollett's life; superb illustrations (much imagery is in reference to political cartoons of the day); excellent index. Highly recommended. 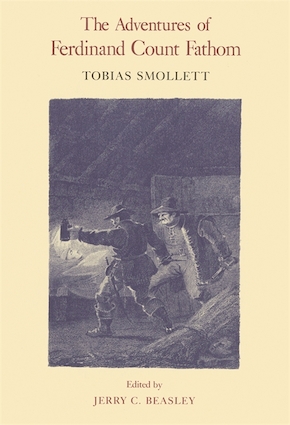