Revolution, Slavery, and the American Renaissance

Revolution, Slavery, and the American Renaissance

These authors responded not only to the state terror of slavery and the Civil War but also to more problematic violent acts, including unlawful revolts, insurrections, riots, and strikes that resulted in bloodshed and death. Rather than position these writers for or against the struggle for liberty, Larry J. Reynolds examines the profoundly contingent and morally complex perspectives of each author. Tracing the shifting and troubled moral arguments in their work, Reynolds shows that these writers, though committed to peace and civil order, at times succumbed to bloodlust, even while they expressed ambivalence about the very violence they approved. For many of these authors, the figure of John Brown loomed large as an influence and a challenge. Reynolds examines key works such as Fuller's European dispatches, Emerson's political lectures, Douglass's novella The Heroic Slave, Thoreau's Walden, Alcott's Moods, Hawthorne's late unfinished romances, and Melville's Billy Budd.

In addition to demonstrating the centrality of righteous violence to the American Renaissance, this study deepens and complicates our understanding of political violence beyond the dichotomies of revolution and murder, liberty and oppression, good and evil.

One of those rare and important books that will seem to its readers at once strikingly new and utterly central to the study of the American Renaissance. Reynolds's readings offer new ways to see each writer's emotional and intellectual trajectory and to deepen our understanding of political violence-an enterprise made resonant by the question of terrorism and violence in our own time.

Makes a compelling case for basic tensions between pacifism and violence in every one of the authors: Fuller, Emerson, Douglass, Thoreau, Alcott, Hawthorne, and Melville. Reynolds cogently shows how these writers ambivalently respond to the turmoil about slavery and the advent of the Civil War, as well as to the fascinating spectre of European revolutions.

—David Leverenz, author of Manhood and the American Renaissance

Building on his seminal European Revolutions and the American Literary Renaissance, Larry Reynolds's Righteous Violence shows how writers ranging from Emerson to Louisa May Alcott wrestled with the moral complexities of responding to and representing political violence. Among the great virtues of this excellent book is its close attention to overlapping national, trans-Atlantic, and hemispheric contexts.

Righteous Violence. . . provides college-level American history and literary collections with a study key to understanding the American Renaissance, using the writings of Fuller, Emerson, Douglass, Thoreau and three others to show how these key writers responded to slavery and the Civil War.

Larry Reynolds's Righteous Violence: Revolution, Slavery, and the American Renaissance opens up new territory in the study of Transcendentalism. . . . it exemplifies the strength and vigour of his fine study, which looks certain to become a key work in American Renaissance studies, and also invaluable to historians of slavery in nineteenth-century America.

Reynolds's chief strength is his ability to turn seemingly disparate writings, events, and political conversations into a coherent story of the complex nature of each thinker's questions, doubts, and ambivalences about violence enacted in the name of social justice.

LARRY J. REYNOLDS is a Distinguished Professor of English and the Thomas Franklin Mayo Professor of Liberal Arts at Texas A&M University. He is author or editor of eight previous books including Devils and Rebels: The Making of Hawthorne's Damned Politics and European Revolutions and the American Literary Renaissance. 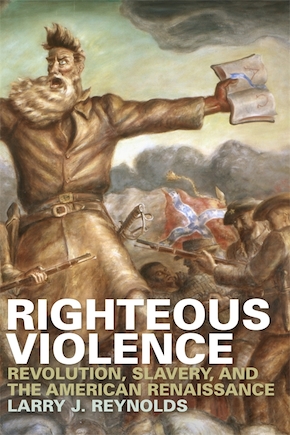