Violence, Race, and the Making of the Child Victim

Violence, Race, and the Making of the Child Victim

Nothing tugs on American heartstrings more than an image of a suffering child. Anna Mae Duane goes back to the nation's violent beginnings to examine how the ideal of childhood in early America was fundamental to forging concepts of ethnicity, race, and gender. Duane argues that children had long been used to symbolize subservience, but in the New World those old associations took on more meaning. Drawing on a wide range of early American writing, she explores how the figure of a suffering child accrued political weight as the work of infantilization connected the child to Native Americans, slaves, and women.

In the making of the young nation, the figure of the child emerged as a vital conceptual tool for coming to terms with the effects of cultural and colonial violence, and with time childhood became freighted with associations of vulnerability, suffering, and victimhood. As Duane looks at how ideas about the child and childhood were manipulated by the colonizers and the colonized alike, she reveals a powerful line of colonizing logic in which dependence and vulnerability are assigned great emotional weight. When early Americans sought to make sense of intercultural contact-and the conflict that often resulted-they used the figure of the child to help displace their own fear of lost control and shifting power.

A nuanced and sophisticated account of the early American cultural landscape and the ways children engaged with cultural anxieties and concerns. The project offers many useful insights into early American writing.

—Caroline Levander, author of Cradle of Liberty: Race, the Child, and National Belonging from Thomas Jefferson to W. E. B. Du Bois

Duane's work offers a valuable road map for scholars seeking routes out of the theoretical blind alleys that potentially stifle inquiry into the history of children.

Duane demonstrates the myriad ways in which early Americans conceptualized their own place within the British system and their relationships with others, including American Indians and enslaved Africans, through the lens of childhood. She analyzes a very wide-ranging selection of texts and draws on cognitive theory to enhance our understanding of the evolving place of children and of childhood as a concept in early American experiences and aspirations.

—Julie Sievers, Journal of the History of Childhood and Youth

ANNA MAE DUANE is an associate professor of English and director of the American Studies Program at the University of Connecticut. She is the author of Suffering Childhood in Early America: Violence, Race, and the Making of the Child Victim (Georgia). 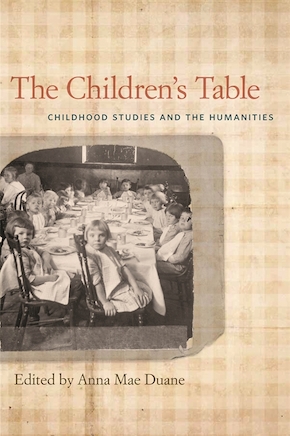