In this study of Kuzguncuk, known as one of Istanbul's historically most tolerant, multiethnic neighborhoods, Amy Mills is animated by a single question: what does it mean to live in a place that once was-but no longer is-ethnically and religiously diverse?

"Turkification" drove out most of Kuzguncuk's minority Greeks, Armenians, and Jews in the mid-twentieth century, but they left behind potent vestiges of their presence in the cityscape. Mills analyzes these places in a street-by-street ethnographic tour. She looks at how memory is conveyed and contested in Kuzguncuk's built environment, whether through the popular television programs filmed on location there or in the cross-class alliance that sprung up to advocate the preservation of an old market garden. Overall, she finds that the neighborhood's landscape not only connotes feelings of "belonging and familiarity" connected to a "narrative of historic multiethnic harmony" but also makes these ideas appear to be uncontestably real, or true. The resulting nostalgia bolsters a version of Turkish nationalism that seems cosmopolitan and benign. This study of memories of interethnic relationships in a local place examines why the cultural memory of tolerance has become so popular and raises questions regarding the nature and meaning of cosmopolitanism in the contemporary Middle East.

A major contribution to urban studies, human geography, and Middle East studies, Streets of Memory is imbued with a sense of genuine connection to Istanbul and the people who live there.

Streets of Memory is a powerful ethnography of spatial relations and social memory in contemporary Istanbul. Beautifully written and original, this book is a most welcome contribution to social geography in Turkey and the Middle East.

—Esra Özyürek, author of Nostalgia for the Modern: State Secularism and Everyday Politics in Turkey

Amy Mills deeply and carefully explicates the place of landscape and the importance of place in mediating multiple identities, ranging from the personal to the national. She is particularly good at using ethnographic fieldwork to demonstrate the on-the-ground manner in which landscape works.

—Richard H. Schein, editor of Landscape and Race in the United States

AMY MILLS is an assistant professor in the department of geography at the University of South Carolina. 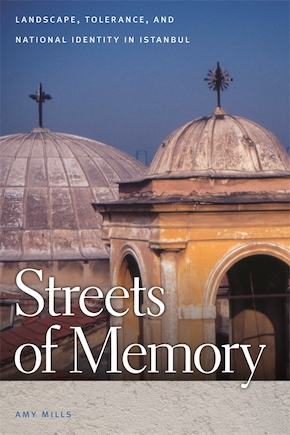