All of the medical, technological, and psychological advances of the twentieth century challenge “mere mortals” in Terese Svoboda’s third book of poetry. In “Faust,” a mini-epic in five acts, the eponymous character of literary legend appears in the form of a woman, who redefines what being mortal means in light of the politics of the Third World, and gender. In contrast “Ptolemy’s Rules for High School Reunions” explores what happens when you do without a pact with the devil. The gods—Greek and otherwise—also make appearances as a TV announcer in “Philomela,” in the basement with the plumber in “The Smell of Burning Pennies,” and in the dyslexic confusion between “Dog/God.” But it is not only the divine that charges the poems in Mere Mortals—sex also suffuses and reinvents key relationships. Readers of such wittily probing poems as “The Root of Father is Fat” and “Brassiere: Prison or Showcase?” will know why Philip Levine has described Svoboda as “one light-year from being the polite, loverly, workshop poet. Mere Mortals poems first appeared in such magazines as the New Yorker, New York Times Magazine, Paris Review, and the American Poetry Review.

Svoboda triumphs, wriggling out of her own verbal knots with the energy and wit of a sideshow star.

Svoboda has such range—of subject, of emotion (from whimsical play to chillingly dead serious), that these poems take you on a wild ride, fast and dangerous, but always in control. This is a goddamn terrific book!

Cool, wry surface: depth charge of cry, of outrage—language at the edge of utterance, utterly original, black-bordered, indelible as we are not.

For those who wish to study a modern style, here is a volume to dig into.

In all, Svoboda's outlandish wit . . . stuns the face of culture's illusions like lightning. Negotiating a 'wacked-out' path to rueful wisdom, she casts a cold eye at love beyond innocence at the end of the 20th century . . . For readers who prefer the chill of a dry martini.

One of Svoboda's most valuable assets is a rambling, vivid imagination which, when not held in check by myth and legend, is fully original.

TERESE SVOBODA is the author of ten books of prose and poetry, most recently Black Glasses Like Clark Kent which won the Graywolf Nonfiction Prize. Her honors in poetry include the Iowa Poetry Prize and two prizes from the Poetry Society of America, the Lucille Medwick Award and Cecil Hemley Award. Her opera WET premiered at Walt Disney's REDCAT performance space in Los Angeles in 2005. Svoboda lives in New York. 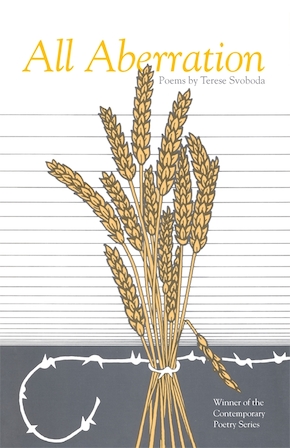