Nineteenth-century Americans celebrated nature through many artistic forms, including natural-history writing, landscape painting, landscape design theory, and transcendental philosophy. Although we tend to associate these movements with the nation's dawning environmental consciousness, Passions for Nature demonstrates that they instead alienated Americans from the physical environment even as they seemed to draw people to it. Rather than see these expressions of passion for nature as initiating environmental awareness, this study reveals how they contributed to a culture that remains startlingly ignorant of the details of the material world. Using as a touchstone the writings of nineteenth-century philanthropist Susan Fenimore Cooper (the daughter of famed author James Fenimore Cooper), Passions for Nature reveals that while a generalized passion for nature was intense and widespread in her era, cultural attention to the "real" physical world was quite limited. Popular artistic forms represented the natural world through specific metaphors for the American experience, cultivating a national tradition of valuing nature in terms of humanity.

Johnson crosses disciplinary boundaries to demonstrate that anthropocentric understandings of the natural world result not only from the growing gulf between science and imagination that C. P. Snow located in the early twentieth century but also-and surprisingly-from cultural productions traditionally viewed as positive engagements with the environment. By uncovering the roots of a cultural alienation from nature, Passions for Nature explains how the United States came to be a nation that simultaneously reveres the natural world and yet remains dangerously distant from it.

Passions for Nature is a magnificent and exciting book, thoroughly grounded in literary studies and in original readings of nineteenth-century literature, the visual arts, and landscape design. It has sweeping implications for new work and it ends with thought-provoking conclusions about our situation today.

—Laura Dassow Walls, author of Emerson’s Life in Science: The Culture of Truth

Passions for Nature turns the conventional wisdom about nature in mid-nineteenth-century America on its head. Rochelle Johnson argues persuasively that most of the era's nature writing and art says more about culture than it does about nature, and her call for us to attend more closely to nature's materiality comes at a crucial time. A bracing and original contribution to environmental studies.

Passions for Nature is especially notable for its compelling defense of the neglected writings of Susan Fenimore Cooper, in the context of bold and inventive comparisons to the work of Emerson, Thoreau, and other better-known contemporaries.

ROCHELLE L. JOHNSON is an associate professor of English and environmental studies at the College of Idaho and immediate past president of the Association for the Study of Literature and Environment (ASLE). She is the coeditor, with Daniel Patterson, of two volumes of Susan Fenimore Cooper's writings, Rural Hours and Essays on Nature and Landscape, as well as a collection of scholarly essays, Susan Fenimore Cooper: New Essays on Rural Hours and Other Works (all Georgia). 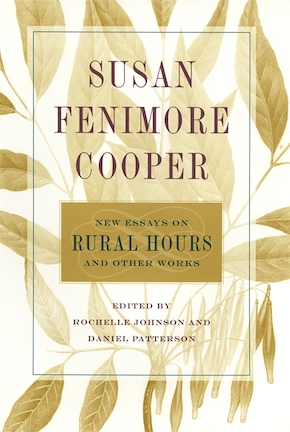