Home > This Business of Relief

The South has been largely overlooked in the debates prompted by the wave of welfare reforms during the 1990s. This book helps correct that imbalance. Using Richmond, Virginia, as an example, Elna C. Green looks at issues and trends related to two centuries of relief for the needy and dependent in the urban South. Throughout, she links her findings to the larger narrative of welfare history in the United States. She ties social-welfare policy in the South to other southern histories, showing how each period left its own mark on policies and their implementation-from colonial poor laws to homes for children orphaned in the Civil War to the New Deal's public works projects.

Green also covers the South's ongoing urbanization and industrialization, the selective application of social services along racial and gender lines, debates over the "deserving" and "undeserving" poor, the professionalization of social work, and the lasting effects of New Deal money and regulations on the region.

This groundbreaking study sheds light on a variety of key public and private welfare issues-in history and in the present, and in terms of welfare recipients and providers.

Written in lucid prose and possessing a useful sweep, This Business of Relief debunks misapprehensions that have had serious and negative consequences for public policy.

—Michael B. Katz, author of In the Shadow of the Poorhouse: A Social History of Welfare in America

Elna Green systematically explores the relationships between southern and national relief practices over a substantial period of time, discovering far more similarity than difference. Unlike typical social-welfare history studies, she casts her net wide, scrutinizing the impact of industrialization, evolving gender roles, race relations, and key social and political developments on poverty and relief. To carry out this project, Green demonstrates impressive command of a broad secondary literature and creative use of primary sources. It is in this last area that This Business of Relief especially shines. Green not only ferrets out a stunning array of primary sources, but she reads them in breathtaking fashion, presenting the lives of the poor through their own eyes and in their own voices.

Dispassionately, carefully, and drawing on an array of historical sources, Elna Green reconstructs the history of relief giving in one southern city and in so doing illuminates an aspect of relief that has until now remained in the shadows.

—Frances Fox Piven, coauthor of Poor People's Movements: Why They Succeed, How They Fail

Green's book represents a maturation of the kind of local study that sparked a new approach to colonial history thirty or forty years ago. . . . Practitioners of current approaches, such as those that emphasize race and gender as the primary determinants of that policy, would be well advised to look at the insights afforded by emphasizing institutions and employing a broad chronological scope and a narrow geographical focus.

This is as good a book on charity in a southern city as we have. It is well written and handsomely illustrated. . . . This book makes sense of the past both on its own terms and in its relationship with the present.

The breadth of Green's core age of two centuries of relief for the poor is impressive. . . . This will be of particular interest to those in Virginia, and most especially Richmond, where we can easily recognize the places, and certainly many of the politics, that continue to play themselves out in the twenty-first century.

Green's work is a provocative and combative piece of prodigious scholarship. . . . This book should be on the short list of every future course in welfare, urban, and Southern history.

Making use of a broad range of secondary literature and an impressive array of primary sources, Green shows how efforts to care for the needy and dependent of the community evolved through warning out and so-called outdoor relief. 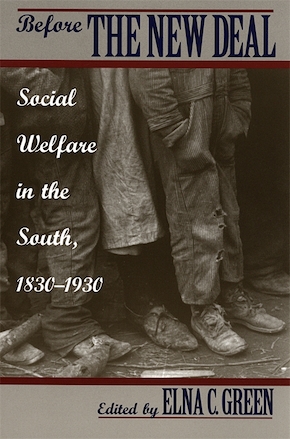