Home > A Companion to V.

To the uninitiated, Thomas Pynchon's V. seems to defy comprehension with its open-ended and fragmented narrative, huge cast of characters (some 150 of them), and wide range of often obscure references. J. Kerry Grant's Companion to "V." takes us through the novel chapter by chapter, breaking through its daunting surface by summarizing events and clarifying Pynchon's many allusions. The Companion draws extensively from existing critical and explicative work on V. to suggest the range of interpretations that the novel can support.

The hundreds of notes that comprise the Companion are keyed to the three most widely cited editions of V. Most notes are interpretive, but some also provide historical and cultural contexts or help to resurrect other nuances of meaning. Because it does not constitute a particular "reading" of, or "take" on, the novel, the Companion will appeal to a wide range of users. Rather than attempting to make final sense of the novel, the Companion exposes and demystifies Pynchon's intent to play with our conventional attitudes about fiction.

A solid, most resourceful guide to a text that challenges even the most knowledgeable and patient readers.

—Studies in the Novel

J. KERRY GRANT is a professor of English at St. Lawrence University and author of A Companion to V (Georgia). 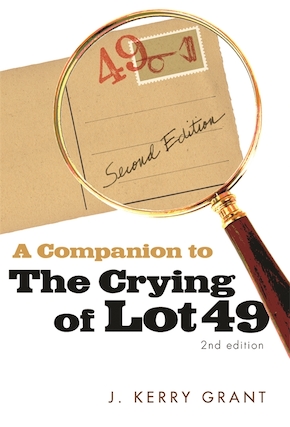