The Letters of a Planter's Daughter in the Old South

• Learn more about Hancock County at the New Georgia Encyclopedia

The Letters of a Planter's Daughter in the Old South

A refined and remarkably well-educated woman, Maria Bryan began corresponding with her sister when she was sixteen years old, two weeks after Julia had married and moved seventy-five miles away to Augusta, at the time Georgia's third-largest city. As Carol K. Bleser points out in her introduction, Bryan travels, reads the popular books of the day, entertains visitors, and makes social calls. At the same time, however, notes Bleser, Bryan's letters belie popular notions about the privileged lives of "typical" planters' daughters in the antebellum South, for she also works at housekeeping, tends the sick at home and in the neighborhood, makes clothes for the family's slaves, and tutors younger siblings.

Bryan's letters keep her sister abreast of local news and gossip (a preacher who can no longer hide that he is suffering from a venereal disease) and family rifts and reconciliations (a brother's apparently severe depression and consequent aimlessness in life and career). They also contain a number of references to the family's slaves. In one letter only, however, did she reveal any feelings about the institution itself. Writing in January 1827 that their overseer had punished her personal slave, Jenny, for not meeting her quota of spinning, Bryan told her sister, "It would have distressed you to see her face bloody and swelled. Oh how great an evil is slavery."

Chatty, thoughtful, and often charming . . . The richness of Maria's letters is enhanced by Bleser's careful editing. Instead of a lengthy biographical introduction, Bleser provides running headings to the letters detailing movements of key family members, identifying important characters, and offering other information designed to help the reader understand them. Bleser is thoroughly familiar with Maria Bryan's social milieu and shares her knowledge fully yet unobtrusively.

CAROL K. BLESER was Kathryn and Calhoun Lemon Distinguished Professor of History at Clemson University, and series editor for Southern Voices from the Past: Women's Letters, Diaries, and Writings. Her books include In Joy and Sorrow: Women, Family and Marriage in the Victorian South, 1830-1900, Secret and Sacred; The Diaries of James Henry Hammond, A Southern Slaveholder, and The Hammonds of Redcliffe. 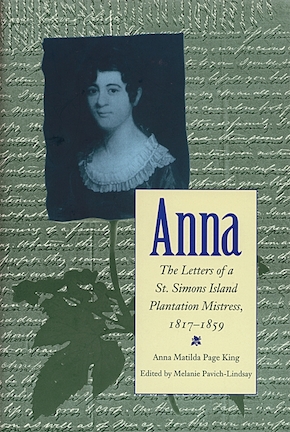