Home > Women Writers of the Renaissance and Reformation

Women Writers of the Renaissance and Reformation

Women Writers of the Renaissance and Reformation

The dawn of humanism in the Renaissance presented privileged women with great opportunities for personal and intellectual growth. Sexual and social roles still determined the extent to which a woman could pursue education and intellectual accomplishment, but it was possible through the composition of poetry or prose to temporarily offset hierarchies of gender, to become equal to men in the act of creation.

Edited by Katharina M. Wilson, this anthology introduces the works of twenty-five women writers of the Renaissance and Reformation, among them Marie Dentière, a Swiss evangelical reformer whose writings were so successful they were banned during her lifetime; Gaspara Stampa, a cultivated courtesan of Venetian aristocratic circles who wrote lyric poetry that has earned her comparisons to Michelangelo and Tasso; Hélisenne de Crenne, a French aristocrat who embodied the true spirit of the Renaissance feminist, writing both as novelist and as champion of her sex; Helene Kottanner, Austrian chambermaid to Queen Elizabeth of Hungary whose memoirs recall her daring theft of the Holy Crown of Saint Stephen for her esteemed mistress; and Lady Mary Sidney Wroth, the first Englishwoman known to write a full-length work of fiction and compose a significant body of secular poetry.

Offering a seldom seen counterpoint to literature written by men, Women Writers of the Renaissance and Reformation presents prose and poetry that have never before appeared in English, as well as writings that have rarely been available to the nonspecialist. The women whose writings are included here are united by a keen awareness of the social limitations placed upon their creative potential, of the strained relationship between their gender and their work. This concern invests their writings with a distinctive voice-one that carries the echoes of a male aesthetic while boldly declaring battle against it.

This successor to the editor's Medieval Women Writers (Georgia, 1984) gathers and introduces the work of many writers, some virtually unknown. Explanatory essays offer balanced accounts of the significance of each; bibliographies encourage further study. All kinds of writing, from poetry to spiritual writing to political speeches, are represented. The book's coverage of a narrow time span is almost too thorough, making it more a reference volume than an anthology. Its contribution is to bring together material not otherwise readily available for continued research on women, especially as writers.

KATHARINA M. WILSON is a professor of comparative literature at the University of Georgia. She is the author of several books and the editor of Medieval Women Writers (Georgia). 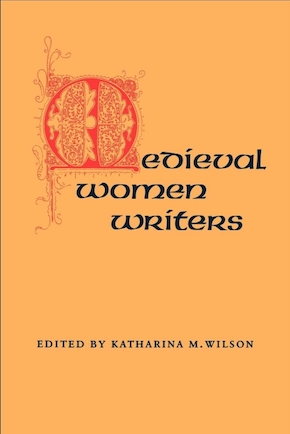