Throughout a long and pioneering Alabama judiciary career, SUE BELL COBB has been an outspoken advocate for children. A former resident of Evergreen, Alabama, she was the first female Chief Justice of the Alabama Supreme Court and before that was the first woman elected to the Alabama Court of Criminal Appeals. Her thirty-year career on the bench began when she was appointed district judge of Conecuh County in 1981. She has devoted herself to juvenile justice, access to justice, public safety, and sentencing reform and has been a public advocate for those issues through appearances on NPR's Fresh Air, Politico, and in the documentary Skewed Justice, and as an International Speaker for the US State Department. She earned history and law degrees with distinction from the University of Alabama. She was a founding member of the Children First Foundation, in addition to her many board memberships which have included the Conference of Chief Justices; Council of State Governments; and Alabama Council of Juvenile and Family Court Judges. She is a graduate of Leadership Alabama and was inducted into the National Voting Rights Women's Hall of Fame. Her awards and honors include Stennis Center for Public Service Pacesetter; Prevent Child Abuse Lifetime Achievement Award; Children's Voice Award; Alabama State Bar Judicial Award of Merit; Outstanding Public Official Award, Alabama Chapter of National Social Worker's Association; Past State Board Chair and Volunteer of the Year, Alabama Division, American Cancer Society. She is married to William J. Cobb. They have three children (Bill, Andy and Caitlin) and three grandchildren (Olivia, Will, and Abigail). 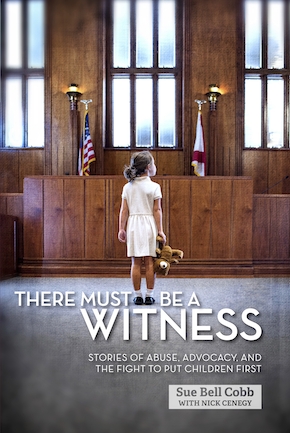 There Must Be a Witness