LARRY D. THORNTON has spent his life being the first African American to do many things –– the first to own a McDonald’s franchise in Birmingham, to serve on the board of directors of one of the country’s largest Coca-Cola bottling companies, to serve First Commercial Bank’s board, and the first to be named president for the legendary The Club. He has forged a path toward greatness while many times being the only person in the room who looks like him. He is an expert on overcoming adversity while maintaining dignity. Thornton grew up in the modest Madison Park community of Montgomery, Alabama, where being black and poor were synonymous. At age 12, he was among the black students who integrated one of the city’s white middle schools, thrusting him onto the front line of incessant racial attacks. That experience nearly hardened Thornton, but upon meeting his twelfth grade English teacher, Miss Nichols, that all changed. She saw something special in him and helped him see it, too. Thornton went on to college at Alabama State University and from there to forge a path toward ground-breaking achievements. Along the way, he developed a personal strategy for resiliency and success that he now shares with others who want a better, more fulfilling life. 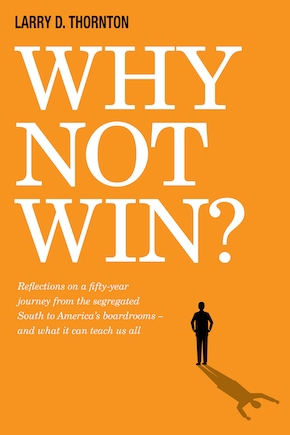