KEN WOODLEY was a journalist for 36 years at The Farmville Herald in Prince Edward County, Virginia, the final 24 years as editor. Unknown to Woodley, the community had been ground zero for white opposition to the US Supreme Court’s landmark Brown v. Board decision of 1954. Rather than integrate classrooms, Prince Edward County shut down its entire public school system from 1959 to 1964, a policy the newspaper had passionately advocated. Woodley spent his entire career lending his voice and his deeds to the journey of racial healing and reconciliation in the community. In 2003, he proposed what Julian Bond would describe as the first civil rights-era reparation in US history. Woodley led the triumphant fight for a state-funded scholarship program for those who’d been left with little or no formal education because of Massive Resistance to Brown. In 2006, the Society of Professional Journalists, Virginia Pro Chapter presented Woodley with its prestigious George Mason Award for lasting contributions to journalism. 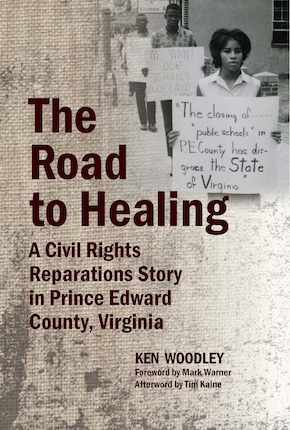