WILLARD "BILL" SANDERS began drawing while in grade school in his hometown of Springfield, Tennessee, and never stopped. Also a gifted athlete and musician, he was the starting quarterback at Western Kentucky University, where he met his future wife and played in a band. Drafted during the Ko­rean War, he became an Army journalist and taught himself political cartooning. After his service, he worked first at the Greensboro Daily News, then the Kansas City Star, and finally at the Milwaukee Journal. Sanders has joyfully skewered the powerful and the corrupt, and his cartoons have won many awards and have been syndicated to more than a hundred newspapers. Retired since 1991 -- but still drawing -- he lives with Joyce, his wife of 60-plus years, in Fort Myers, Florida. His current cartoons can be seen at sanderscartoon.blogspot.com. 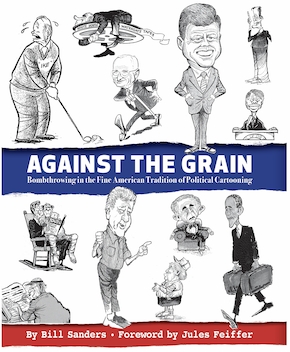