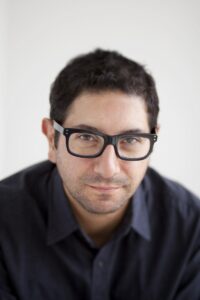 Antonio Ruiz-Camacho’s debut collection, Barefoot Dogs, won the Jesse H. Jones Award for Best Work of Fiction and was a Kirkus Reviews and San Francisco Chronicle Best Book of 2015. A National Magazine Award finalist, his work has appeared in the New York Times, Salon, Texas Monthly, Texas Highways, and other publications. Born and raised in Toluca, Mexico, he moved to the United States at the age of thirty-one and began to write in English at thirty-five. He earned his MFA from the University of Texas at Austin’s New Writers Project and was a Knight Journalism Fellow at Stanford University